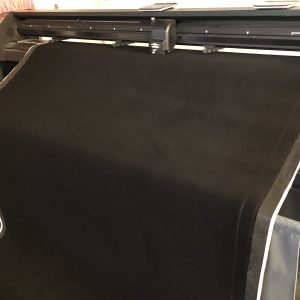 We were asked by Illusion Design to produce a dry brush effect pattern to go round a giant projector screen that they were building, to form the backdrop for the Swarovski Fashion Awards 2018 in the Albert Hall, London.

The material had to be extremely matte black, so that there would be no reflection from the powerful projector that was being used to animate the backdrop. 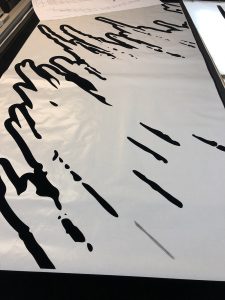 After extensive testing, we found a fine black flock with an adhesive backing that would work on our Summa vinyl cutter. Although not intended for use with this material, we found that the depth setting of the cutting blade was crucial to the successful cut as the backing paper was so thin.

The end result was a giant projector screen 24 metres wide and 10 metres tall with a CAD cut pattern blending it into the back wall with a dry brush effect, mimicking the design on the Swarovski invitations.

To finish the set off, we also cut a similar design in brushed gold, that blended into the floor of the stage, where Meghan Markle introduced the award show.

This year we supplied the placards and decals to help Studio Makecreates latest creation go off with a real swing. Their colourful float caught everyones eye, and so did the Correx placards that we printed and CAD cut to shape for them.

Our friends at Absolute Casing needed some CAD cut logos for the flight cases they were making for the England Rugby squad. We printed these on Supertack gloss vinyl and cut them to shape on the tangential CAD cutter.

We were asked to produce eight giant cutout headless Pudsey Bears this November. We supplied these durable CAD cut black Amari Foam prints to use on the set of the live Children in Need show broadcast by the BBC. We also made the eight boxes out of lightweight Foam-X that were …

This site uses Akismet to reduce spam. Learn how your comment data is processed.